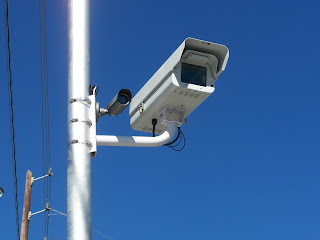 Editor's Note: The Express-News will publish a Red-Light Camera commentary by former Balcones Heights Councilman Steve Walker this weekend
By Ben Wear
American Statesman Staff
Texans, or at least their back bumpers, should get ready for their closeups. Lots of them. Red light cameras, and the through-the-mail citations they generate, have caught on in cities and hamlets across the state.
More than a dozen municipalities, including Dallas and Houston, (Balcones Heights) have them in place to catch red light runners. And more than 60 cities joined an informal "red light camera coalition" that hovered over the Legislature this spring as it considered how to regulate the emerging trend.
Austin and Round Rock were a part of that coalition, and both are moving toward installing cameras. Later this summer, Austin's first red light cameras will appear at two intersections, although the pilot will generate only dummy citations so city officials can evaluate how they do. Round Rock is taking bids, and its city council probably will pick a vendor early in the fall.
"Our goal is just to reduce the number of people running red lights," Round Rock spokesman Will Hampton said. "Does it generate revenue? Yes. But that's how we change behavior."
The cameras, in general, snap pictures of the rear of cars if they enter an intersection after the light has turned red. The owner gets a notice in the mail carrying a civil penalty, which in most cases is about $75. Because the cameras don't identify a driver, cities can't cite offenders with a more typical criminal ticket, and the violations don't affect insurance rates.
Since the cameras first appeared in a couple of Dallas suburbs in 2004, the debate in Texas has centered on the revenue-versus-safety issue, as well as the question of whether red-light cameras in fact make roads safer. Some opponents, pointing to studies, say the cameras cause more rear-end accidents (because of folks who jam on the brakes to avoid a ticket) than they prevent.
In a 2005 review of data, the Federal Highway Administration concluded that the presence of the cameras had reduced right-angle crashes about 25 percent. Rear-end accidents had increased 15 percent. And crashes of all kinds at nearby intersections had decreased 8.5 percent.
As for the revenue-versus-safety question, key legislators moved this session to ensure that cities will have as little financial incentive as possible to install cameras. The result was Senate Bill 1119, which was carried by state Sen. John Carona, R-Dallas, and signed by Perry last week. It will go into effect Sept. 1.
The bill, at least for new contracts, will ban the practice of paying vendors based on how many tickets or how much revenue their cameras generate. Cities can pay a set fee per month for each camera, which in existing contracts is about $5,000 a camera each month.
Cities will also have to give half of their net revenue to "regional trauma accounts" — after deducting the costs of buying, operating and maintaining the cameras as well as the expense of collecting the fines. The remaining 50 percent can be used only for "traffic safety programs."
The new law, in answer to suspicions that cities might foreshorten yellow light cycles to catch more people with the cameras, also requires that the yellow period be at least as long as recommended in a state traffic control manual. It requires an engineering study of each intersection to see whether a design change might reduce red-light violations in lieu of a camera and instructs cities to install warning signs about the cameras at least 100 feet back from the intersection. And the law limits fines to $75 and late payment penalties to $25.
Despite all the limitations, Austin and many other cities are moving forward. Austin will have two vendors put cameras on the southbound frontage road of Interstate 35 at Martin Luther King Jr. Boulevard and on the northbound frontage road at 11th Street. During the 60-day trial, offenses will generate only letters sent to the Municipal Court, and violators won't be notified or have to pay a fine.
After that, the City Council will choose a vendor to put in cameras at a still undetermined number of intersections. By late this year or early 2008, Austinites who run those lights should be getting their first actual bits of bad news in the mail.
"Nobody likes getting a ticket, whether it's from a camera or a police officer," said Shelley Franklin, who runs Garland's red light camera program. "But what's the alternative? How else do you get people's attention? Someone has to protect us from ourselves or each other."