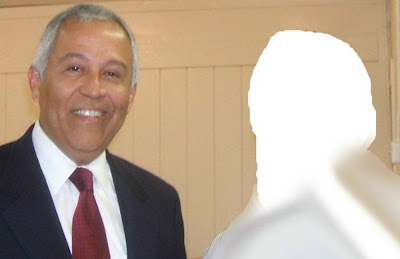 Congressman Henry Bonilla and Democratic activist now in the witness protection program.
Invitation: Worthless
Photo: Priceless!
Bexar County politics is definitely strange at best, weird at worst. Take for instance the cross-wire politics that happened on the Southside at the Harlandale Civic Center Thursday, August 31st.
Republican Congressman Henry Bonilla invited what should have been a huge crowd of Republican precinct chairs for a gathering so that he could bond with them, so to speak.
Apparently he was attempting to revitalize his Southside campaign since he recently boasted that he is a product of the Southside. It has been reported that his mother lives somewhere in the Southside.
Unfortunately for him and his campaign staff, only about 20 or so precinct chairs showed up for the meeting. A call supposedly went out for Republicans to attend.
One Democratic Party activist was called at the Bexar County Democratic Party Headquarters and was invited to attend the meeting. Obviously the Bexar Democratic Party's caller ID did not dissuade the caller from inviting the Party activist.
In an effort to be polite, the activist and her husband went to the meeting with digital camera in hand and for what ever reason, took pictures with the Congressman and the candidate for State Rep. District 118, George Antuna. Never asked directly by the Bonilla staff what Precinct they represented, they blended in with the crowd, so to speak.
Bonilla was quoted by the Party activist as saying, "we asked the Judge for the Southside and we got the Southside." Bewildered and befuddled, the two Democratic activists scrathed their heads and waved good bye to the Republican precinct chairs.
The moral of the story is when you get invited to a Republican event, take your digital camera and document your visit!!!
Seeing is believing.