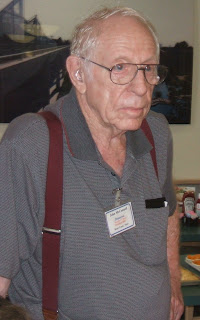 John McConnell, (photo)
I don't usually respond to negative publicity such as the recent comments made by The Republicrat as posted by Steve Walker on the NEBCD website, but my name was mentioned with a negative connotation. I do think that the Republicrat, who ever she may be, made some mistakes in her latest column that should be addressed --- and if I don't do it, who will?

I did check out the "South Texas Republicans" website in accordance with the advice of Sun Tzu to "know thine enemy." To be sure, the Republicrat' s column was actually published there just as posted by Walker.

To begin with, the Republicrat inserts a line from that great poem The Raven by Edgar Allen Poe where is does not fit. This is inexcusable. It was careless at best.

Next she reaches conclusions drawn from the front Pages of the Express-News. I don't seen any new conclusions at all in her column. I am sure I have heard them all before. But, no matter.

Her most egregious error is her inability to distinguish between ad hominem--against the person--attacks and legitimate disagreement with beliefs and ideas. The Republicrat accused "that woman" Madeleine Dewar of "trashing" her in a previous newsletter. I checked out that newsletter and could find no evidence of an attack by Ms. Dewar on the Republicrat' s appearance or personality.
She only disagreed with the Republicrat's statements about the Democratic County Chair and the operation of the Bexar County Democratic Party. Unless I am mistaken, the Republicrat offered to engage in hand-to-hand- -or pump-to-pump- -combat with Ms. Dewar. After military service during wars, police actions, and the Cold War, I have become a bit of a peacenik, but that I would like to see.

The Republicrat appears to be woefully ignorant of how the Bexar County Democratic Party is required by law to operate. She states that Carla (Carla Vela, our County Chair) "is incapable of making the hard decisions." Apparently she does not realize that the "hard decisions" of the Bexar County Democratic Party must be made by the representatives of the people (the Democratic precinct chairs) when called to order as members of the Democratic County Executive Committee (CEC). Carla Vela's role in this process is as presiding officer. Her duty is to conduct the decision-making process in accordance with parliamentary procedure as expressed, in our case, in Robert's Rules of Order. She is certainly capable of fulfilling this role.

The Republicrat states that "personal attacks are the hallmark of the local Democratic Party." She says that "I hear [hearsay] that at nearly every Party meeting, someone disparages someone before the night is done." Disagreement with someone in the debate which is vital to democratic decisions is not disparagement. It is a vital element in reaching decisions which will result in the greatest good to the greatest number.

Finally, the Republicrat says that "I also hear [again hearsay] that John McConnell is usually involved."

I do try to be involved since, as a precinct chair, that is my job, but I do not engage in personal attacks. I never disparage those aspects of a person's physical characteristics, mental capacities, or family background over which they have little or no control. I do feel free to disagree with their ideas.

When the debate is over and the vote is taken, I am obligated to abide by the decision of the majority. That is Democracy in action.

I recommend that the Republicrat renounces hearsay and innuendo and finds out what is actually going on in the outside world. I invite her to attend the next meeting of the Bexar Democratic Party County Party County Executive Committee on January 13, 2007.
The meeting will be at the Travis Park United Methodist Church Fellowship Hall, 230 East Travis Street at 10 a.m. There will be a "Braggin' Breakfast" at 9:AM at this same location prior to the CEC meeting. I have two tickets to this breakfast which the Republicrat may claim by calling me at 824 1329 and properly identifying herself as the Republicrat.