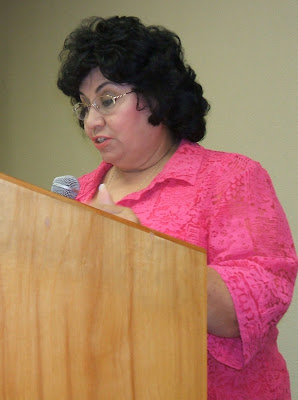 Carla Vela (photo)
Bexar County Democratic Chair
By Jim Forsyth
SAN ANTONIO, Texas (Reuters) - U.S. Hispanic groups and activists on Thursday called for a moratorium on workplace raids to round up illegal immigrants, saying they were reminiscent of Nazi crackdowns on Jews in the 1930s.

They accused the Department of Immigration and Customs Enforcement of "racial profiling," or selective enforcement against Hispanics, for arresting 1,300 workers on immigration violations in December 12 raids at meatpacking plants in six states.
"We are demanding an end to these immigration raids, where they are targeting brown faces. That is major, major racial profiling, and that cannot be tolerated," said Rosa Rosales, president of the League of United Latin American Citizens, at a news conference.
"This unfortunately reminds me of when Hitler began rounding up the Jews for no reason and locking them up," Democratic Party activist Carla Vela said. "Now they're coming for the Latinos, who will they come for next?"
The groups, which included LULAC, the Mexican American Legal Defense and Education Fund, the Hispanic National Bar Association, and the National Association of Latino Elected and Appointed Officials, sent letters to U.S.

They also called on Congress to quickly to approve immigration legislation that would allow for "guest workers" to remain in the United States.
The government crackdown follows months of political debate about illegal immigrants that culminated in a new law authorizing, among other things, construction of a 700-mile wall along several stretches of the U.S.-Mexican border.
Many of those arrested in the December 12 raids, all at Swift & Co. plants, were from Latin American countries.
Chertoff said the raids showed that illegal immigrants, estimated to number 12 million in the United States, contributed to the problem of identity theft because they worked under false or stolen identities.
Anger at anti-immigrant rhetoric and measures is said to have hurt Republican candidates with Hispanic voters in November elections that saw the Democrats win a majority in the U.S. House of Representatives and Senate.
LULAC, the oldest and largest Hispanic group in the country with 115,000 members, said workplace raids would cause families to be separated if the arrested immigrants were deported and also would hurt the U.S. economy.
"Every labor-intensive industry including the hospitality, construction, agriculture and restaurant industries will be adversely impacted if these raids continue," Rosales said.
This article was posted, Thursday, Decemeber 21st.
See links:
www.texasrainmaker.com/category/race_racism
www.tailrank.com/997934/Latino-groups-call-raids-Hitleresque