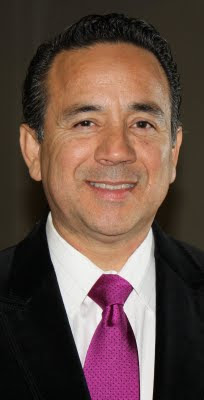 Propelled by the momentum of a successful legislative session and the statewide expansion of his Blue Ribbon Task Force on child abuse and neglect, Sen. Carlos Uresti filed for re-election to the Texas Senate.

“It has been a great honor to serve the people of Senate District 19, and today I am asking them to extend that privilege,” Uresti said. “Together we’ve accomplished a lot, but there is still much to be done, and I am not one to give up a fight.”

Uresti formally announced his re-election bid to about 1,200 supporters Friday evening at his 13th Annual Christmas Party in San Antonio .

Uresti, who is seeking his second term in the Senate, has risen to a position of leadership in the upper chamber, where he is vice chairman of the Administration and Agriculture and Rural Affairs committees and serves on the Natural Resources and Health and Human Services committees. He also co-chairs the Bexar Metropolitan Water District Oversight Committee and was recently selected by his colleagues to serve as chairman of the Senate Hispanic Caucus.

A champion for children and a staunch advocate for military veterans, Uresti said the next session of the Texas Legislature will be vitally important to both those groups.

In the last session, Uresti passed a bill that created a statewide version of the Blue Ribbon Task Force he formed in 2004, following the starvation death of 4-year-old Jovonie Ochoa. The panel will conduct an in depth interim study of how the state, local governments, law enforcement and the courts address child abuse issues and develop new strategies for treatment and prevention.

“Right now we spend only about 1 percent of our Child Protective Services budget on prevention,” Uresti said. “That effort must be vastly expanded if we are to effectively combat the recent surge of child deaths and injuries. As we look at proposals for reform, the children of Texas need us to be smart, vigilant and efficient in forming public policy and passionate about their welfare and their future.”

Uresti, who co-authored a bill in the last session that granted a full property tax exemption to veterans who were 100 percent disabled by their military service, said more must be done for veterans in the next session, and that he will work to implement a constitutional amendment that allows state resources to be used in the creation of veterans health facilities.

“ Texas must never shirk its duty to provide programs and services for our veterans,” said Uresti, who served as a captain in the Marines. “Duty and commitment were their watchwords, and they must be for us as well.”

Uresti said he would also continue to work for economic development and job creation for the people of Senate District 19, because everyone who is willing to work deserves a job and a living wage.

Uresti, a San Antonio attorney who previously served four terms in the Texas House, is one of eight siblings who grew up on the South Side, where his parents still reside. He has two sons — Michael and Carlos Jr., a member of the Marine Reserves — and a grandson, Benjamin.