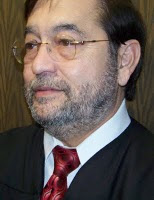 There are no words to describe how we feel. Judge Andy Mireles was a great friend, awesome role model, and an everlasting asset to the community. He will be missed by all. The Judge has left an imprint on the city, county and the State of Texas that will be felt for generations to come.

Obituary: Honorable Judge Andy Mireles, age 59, passed away on Tuesday, December 15th, 2009 with his beloved wife by his side. He is preceded in death by his parents, Emilio and Eleanor Mireles; sister, Marie Christine Mireles and his brother, William Mireles.

Visitation will be held at Porter Loring on McCullough on Sunday, December 20th from 1 p.m. -5 p.m.. with a Rosary at 7 p.m. in the Chapel. Interment in the Texas State Cemetery in Austin, Texas.