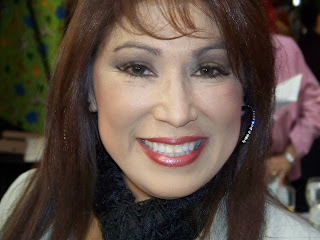 Alameda Theatre creator G.A. “Tano” Lucchese’s opened the theatre in 1949 with pride and vision “as a permanent symbol of good faith and understanding between the Latin-American and Anglo-American where they might share and recognize two different cultures.”
In keeping his dream alive the Sky Loft at the Alameda Theatre will bring together people of cultural diversity to share one night under the stars, Una Noche Bajo Las Estrellas! Come celebrate this holiday season with Latin Fusion TV at their Annual Christmas Special and help bring some holiday cheer to families throughout San Antonio.
Latin Fusion TV Host & Executive Producer Brandy Lopez will host a fundraising event to benefit three local charities. The event will take place at the historic, Alameda Theatre’s Sky Loft on Friday, December 19th from 6 p.m.-2 a.m.

The main focus of the evening is to raise funding to help bring some holiday cheer to San Antonio families who may not otherwise be able to celebrate this year. The Masters of Ceremonies will be San Antonio T.V. and radio personality, Sonny Melendrez & KENS 5 Sportscaster, Joe Reinagel.
The evening will showcase live performances by our featured performer David Marez, other performers include Sol Latin Rock, Rebecca Valadez, Rick Balderama, Javier Galvan y Fama and Artie V. Additional guest appearances and performances by various celebrities including, Nashville Star’s very own Gabe Garcia.

The evening will begin with complimentary wine and the sounds of Sol Latin Rock, followed by dinner 7-9pm and dance 9pm-2am. Individual tickets for this event can be purchased for $40 and guest are asked to donate an unwrapped gift.
Proceeds from this event will benefit, People Who Care Charity and the gifts will be donated to Jennie’s Toys & Bexar County Sheriff’s Department, Stuff The Bear. In addition to an entertaining evening raffle tickets will be on hand to purchase for numerous gift certificates to local salons, bars/lounges and restaurants who have donated to the cause.