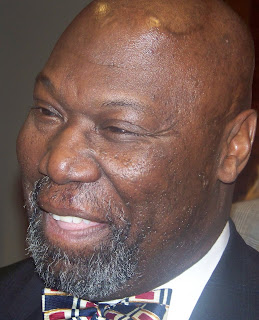 AUSTIN – Michael Williams, (photo) Chairman of the Texas Railroad Commission, today announced that he is a candidate for the United States Senate.

Williams is running for the seat currently occupied by U.S. Senator Kay Bailey Hutchison. He is a candidate for the seat when she resigns or retires.

“This critical juncture in time provides an historic opportunity for Texans to rekindle our can-do spirit; to look to the future for solutions, not to the past,” said Williams.

“I have taken a leading role on energy, education, criminal justice, economic and environmental issues as a Railroad Commissioner and a member of the U.S. Departments of Justice, Education and Treasury,” said Williams. “We can have economic prosperity and cleaner air and water. We can have financial security without our elected officials compromising their conservative principles. We can have government accountable to the people,” continued Williams.

Williams was appointed to the Texas Railroad Commission in 1998 by then-Governor George W. Bush. He has since won reelection to the statewide office three times.

“I cannot sit idly by while Washington continues its dysfunction,” said Williams. “Change shouldn’t mean a blank check for Washington. I will be the voice of working families who deserve a government as responsible with their money as they are.”

“Countless Texans have urged this campaign to begin. I urge them and all Texans to join with me as we renew our call for common-sense, solutions-oriented government that gets results,” said Williams.

“I am not exploring a run. I am running,” concluded Williams.

A Midland native, Williams is known nationally as an expert on energy issues. He serves as the Chairman of the Governor’s Competitiveness Council. He also chairs the Governor’s Clean Coal Technology Council, represents the Governor on the Southern States Energy Board and is a member of both the National Coal Council and the Interstate Compact Commission.

An advocate of alternative energy, Williams is championing the conversion of Texas public and private fleets, especially school buses from diesel and gasoline to environmentally cleaner, cheaper and domestically produced natural gas and propane through his “Breathe Easy” initiative.

The son of public school teachers who earned degrees in math and the husband of a mechanical engineer, Michael is the creator and co-sponsor of the “Williams Future Innovators”, a summer camp for 6th through 12th graders to inspire the next generation of scientists, technologists, engineers and mathematicians.

Williams has served as Chairman of Texas Victory in 2004 and 2006, Honorary State Chairman of Big Brothers Big Sisters-Texas and General Counsel to the Republican Party of Texas.