Houston Mayor Bill White to run for US Senate seat 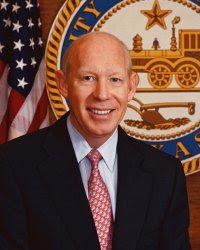 Houston Mayor Bill White (photo) today announced that he intends to seek election to the U.S. Senate from Texas. "Working for my neighbors as mayor has been a great honor," said Mayor White.
White was re-elected as mayor of the nation's fourth largest city with 91% and 86% of the vote. "Texas needs a new voice in decisions that will be made in Washington, and my business experience and administrative expertise will ensure utilizing fiscally responsible means to get our economy moving,"
White added. During White's five years as mayor, Houston added more jobs than any other city in the United States. "Representing Texans in the Senate will allow me to work for energy policy which is more secure and affordable," said White, who has decades of experience in energy business and policy, including service as U.S. Deputy Secretary of Energy.
Under White's leadership, the City of Houston expanded parks, libraries and health clinics, while cutting the property tax rate and raising the property tax exemption for our senior citizens every year. The FBI presented Mayor White with the FBI Director's Community Leadership Award, noting that "Mayor White made public safety one of his highest priorities, as evidenced by Houston's decreasing crime rate."
Mayor White is known for his work in promoting energy efficiency, fighting pollution, and redeveloping blighted neighborhoods. Mayor White received the prestigious Profile in Courage Award after Hurricane Katrina "in recognition of his political courage in leading a compassionate and effective government response to the disaster."
Before serving as Mayor, White led businesses in the energy, real estate, and engineering and construction industries. Senator Kay Bailey Hutchison has told other senators and many constituents that she does not intend to seek re-election or serve out her current term. Mayor White has filed a campaign treasurer.
Mayor White will make a formal announcement tour around the state in early 2009.