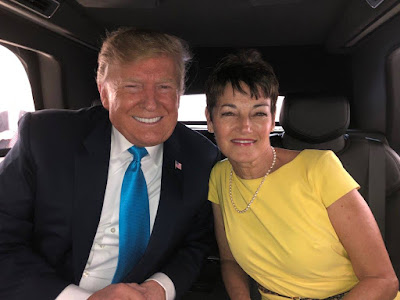 Washington-House Democrats on Tuesday asserted that President Trump abused his power by pressuring Ukraine to help him in the 2020 presidential election, releasing a 300-page impeachment report that found that Mr. Trump “placed his own personal and political interests above the national interests of the United States.”

The report by Democrats on the House Intelligence Committee was a sweeping indictment of the president’s behavior, concluding that his actions sought to undermine American democracy and endangered national security.

They left it to another committee to decide whether to formally recommend Mr. Trump’s impeachment and removal, but the report laid out in searing fashion what are all but certain to be the grounds on which the House moves to impeach the president.

“The founding fathers prescribed a remedy for a chief executive who places his personal interests above those of the country: impeachment,” it said.

The report’s release set in motion the next phase in the impeachment of Mr. Trump, accelerating a constitutional clash that has happened only three times in the nation’s history.

Both parties are poised for a fierce, partisan debate in the House Judiciary Committee over whether to charge the president with high crimes and misdemeanors, the Constitution’s threshold for removal, and a likely partisan vote by the House to do so before Christmas.The lengthy document contained few new revelations, and instead outlined more than two months of public & private testimony from diplomats and other administration officials.

They described a campaign by the president and his allies to pressure Ukraine to announce investigations of former Vice President Joseph R. Biden Jr. and other Democrats, while withholding nearly $400 million in military assistance and a White House meeting for Ukraine’s president.

“The impeachment inquiry into Donald J. Trump, the 45th president of the United States, uncovered a monthslong effort by President Trump to use the powers of his office to solicit foreign interference on his behalf in the 2020 election,” said the report, released ahead of a vote on Tuesday evening by the Intelligence Committee to formally approve it.

It asserts that Mr. Trump’s “scheme subverted U.S. foreign policy toward Ukraine and undermined our national security in favor of two politically motivated investigations that would help his presidential re-election campaign.”

The report also lays out what it calls an “unprecedented campaign of obstruction of this impeachment inquiry” by Mr. Trump, based on his refusal to release documents from agencies including the State Department, the Defense Department and the White House budget office, and his directive that potential witnesses not cooperate.

“The damage to our system of checks and balances, and to the balance of power within our three branches of government, will be long-lasting and potentially irrevocable if the president’s ability to stonewall Congress goes unchecked,” the report concluded.

“Any future president will feel empowered to resist an investigation into their own wrongdoing, malfeasance or corruption, and the result will be a nation at far greater risk of all three.”

The report does indicate that Democrats collected more raw evidence than previously known, including call records produced by AT&T and Verizon showing a series of phone calls between Mr. Trump’s personal lawyer Rudolph W. Giuliani and his associates and allies of the president at high levels of government.

One burst of calls that Democrats highlighted came as Mr. Giuliani was executing a smear campaign against the ambassador to Ukraine, Marie L. Yovanovitch, and pressing Ukraine to announce investigations that could benefit Mr. Trump.

Mr. Giuliani spoke to Lev Parnas, his business partner who was charged by federal prosecutors in Manhattan in a related scheme; Representative Devin Nunes of California, the top Republican on the Intelligence Committee; Kash Patel, a former Nunes aide who works on the National Security Council; as well as unmarked numbers at the White House and its budget office.

Traveling with Mr. Trump in London for a meeting of NATO leaders, Stephanie Grisham, the White House press secretary, denounced the Democratic report moments after it was released. She called it the conclusion of a “one-sided sham process” led by Representative Adam B. Schiff of California, the chairman of the Intelligence Committee.

“Chairman Schiff and the Democrats utterly failed to produce any evidence of wrongdoing by President Trump,” Ms. Grisham said in a statement. “This report reflects nothing more than their frustrations. Chairman Schiff’s report reads like the ramblings of a basement blogger straining to prove something when there is evidence of nothing.”

Earlier in the day, Mr. Trump savaged Mr. Schiff as “deranged” and “sick,” accusing Democrats of trying to overturn the results of the 2016 elections through an impeachment inquiry he said “turned out to be a hoax.”

“It’s done for purely political gain,” Mr. Trump said. “They’re going to see whether or not they can do something in 2020 because otherwise they’re going to lose.”

The report is a watershed moment for Mr. Schiff’s months-old inquiry, opening what promises to be a bitterly partisan and freewheeling phase in which the two parties will feud publicly over weighty constitutional questions while competing to frame their own political narratives.

Anticipating the split, Mr. Schiff used the report to lament the disconnect between the parties and warn that it amounted to precisely the kind of intensive polarization that worried the framers of the Constitution.

“Today, we may be witnessing a collision between the power of a remedy meant to curb presidential misconduct and the power of faction determined to defend against the use of that remedy on a president of the same party,” Mr. Schiff wrote. “But perhaps even more corrosive to our democratic system of governance, the president and his allies are making a comprehensive attack on the very idea of fact and truth.”

He added, “How can a democracy survive without acceptance of a common set of experiences?”
Written in narrative form, the report paints a portrait of a president eager to use the power of his office for personal gain, and a foreign policy establishment that watched with alarm as Mr. Trump’s allies exerted pressure on Ukraine’s president, Volodymyr Zelensky, to do Mr. Trump’s bidding.

The Judiciary Committee is scheduled to begin its debate on Wednesday with a public hearing that features four constitutional scholars discussing the historical standards for impeachment and their assessment about whether Mr. Trump’s actions meet the bar for removing him from office.

Lawyers for the Intelligence Committee are expected to formally present the report to the judiciary panel and answer questions from its members in the coming days, though no hearing has been scheduled.

Mr. Trump’s Republican allies on Capitol Hill released their own report on Monday, condemning the Democratic impeachment effort as illegitimate, and asserting that the president was not seeking personal political advantage when he pressed Ukraine’s leaders to investigate his rivals, but was instead urging the country to address corruption.

There is little doubt, however, that the House is headed toward a strictly partisan impeachment of Mr. Trump — something that Democratic leaders had long toiled to avoid — in which Democrats vote to remove him while Republicans oppose the move.

In the Senate, where it is increasingly apparent to leaders of both parties that the chamber is going to conduct an impeachment trial, Senator Mitch McConnell, Republican of Kentucky and the majority leader, made clear that he has been studying up on how to run one.

He said he and Senator Chuck Schumer of New York, the Democratic leader, could work out a bipartisan agreement governing procedures for a trial, or failing that, that “51 senators of any particular persuasion” could set the tone.

“There is no answer at the moment,” Mr. McConnell told reporters.Speaker Nancy Pelosi formally announced the impeachment inquiry after a whistle-blower submitted a complaint in August that detailed a July 25 telephone call in which Mr. Trump urged Mr. Zelensky to “do us a favor” by pursuing investigations into Mr. Biden and other Democrats.

But the impeachment inquiry quickly moved beyond the whistle-blower complaint as Democrats secured testimony — first behind closed doors and later in public hearings broadcast live on television — from more than a dozen Foreign Service officers, budget officials and senior staff at the National Security Council.