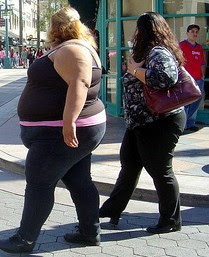 One of many articles on web claiming obesity is contagious (Say Anything Blog)
If your friends and family get fat, chances are you will too, researchers report in a startling new study that suggests obesity is “socially contagious” and can spread easily from person to person. The large, federally funded study found that to be true even if your loved ones lived far away.
Social ties seemed to play a surprisingly strong role, even more than genes are known to do. “We were stunned to find that friends who are hundreds of miles away have just as much impact on a person’s weight status as friends who are right next door,” said co-author James Fowler of the University of California, San Diego.
The study found a person’s chances of becoming obese went up 57 percent if a friend did, 40 percent if a sibling did and 37 percent if a spouse did. In the closest friendships, the risk almost tripled.
Researchers think it’s more than just people with similar eating and exercise habits hanging out together. Instead, it may be that having relatives and friends who become obese changes one’s idea of what is an acceptable weight.
Despite their findings, the researchers said people should not sever their relationships.