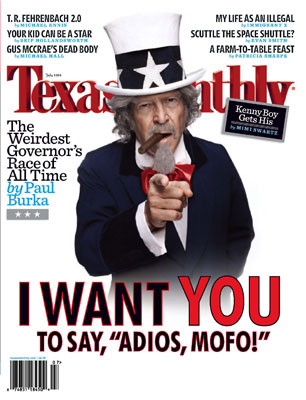 Independent candidate for Texas Governor, Kinky Friedman's photo is on the front cover of this month's "Texas Monthly," while Democrat Chris Bell is interviewed by Carlos Guerra of the Express-News.

Democratic gubernatorial nominee Chris Bell was a few minutes late to the podium of the Texas State Association of Electrical Workers meeting Saturday morning because conferees stopped him along the way to talk and hand him personal checks.

"There is a strange dynamic in this five-way race," he told the packed room. "But we need to preach to the choir because they aren't singing loudly enough."

The state Democratic Party's and AFL-CIO's grass-roots groups are critical, he said later, and they must be united and energized — and convinced that Bell can win — to get the vote out.

"We have an incredible opportunity, and I did not get into this race just to be the Democratic nominee," he told the group. "I will win because George (W.) Bush can't come into Texas on a white horse two weeks before and change the results of this election."

"I will win because George (W.) Bush can't come into Texas on a white horse two weeks before and change the results of this election."

In 27 minutes, Bell chimed in — ahem — on school and health-insurance reforms, and government that helps people instead of stymieing them.

"High-stakes testing has gutted public school curriculum and contributed to our having the (nation's) highest dropout rate," he said. "If we're going to prepare kids for life and work in the 21st century, we need to teach them more than how to take another standardized test."

He isn't opposed to standardized tests, he said, but Texas schools have gone from "teaching to the test to teaching the test," and when he asked one McAllen student how much time they spent drilling for TAKS, he replied: "All the time."

Texas has outrageously high dropout rates, he said, and Texas students score abysmally low on the SAT. And many who do go to college need remedial classes to bring them up to par.

"Many who watched the special session were appalled," Bell said. "It was supposed to be about public school finance, but public schools got left out until the last minute, when a few more Band-Aids were taken out of the box and little more window dressing was added to the final legislation."

He excoriated Gov. Rick Perry for "completely misrepresenting the truth" in TV ads claiming that homeowners would realize tax savings of $2,000 when the real reductions — all of which will be replaced with higher taxes collected elsewhere — will be, at best, $500, he said.

But the real reason Bell was "preaching to the choir" is that he needs to convince his base that he can win, which is why he noted that, "experts predict that between 38 and 42 percent of the vote will carry the day," and "during these bleak last 12 years when we haven't won statewide elections, Democrats running statewide have gotten 38 to 42 percent of the vote; that's our baseline vote.

"If we stick together, united, we can have a Democratic governor in January," he said, "and it's important for us to learn to win again because Texas needs us to lead again because we are in last place in an astounding number of categories.

"We will continue to remind people that Rick Perry and Carole (Keeton) Strayhorn are two sleeves in the same empty suit," he said later.

Asked about his next stop, he said a chiropractors' association had invited him "and of course, I, ahem, adjusted my schedule because I want their backing."